Her Smart Choice Women’s Health Center Educational Series Presents ‘How To Differentiate A Normal Menstrual Cycle From An Abnormal One?’

Preventive health visits should begin during adolescence to start a dialogue and establish an environment where a young patient can feel good about taking responsibility for her own reproductive health and feel confident that her concerns will be addressed in a confidential setting .

Because menarche is such an important milestone in physical development, clinicians should educate adolescent girls and their parents or guardians about what to expect of a first menstrual period and the range for normal cycle length of subsequent menses.

Young girls and their parents or guardians frequently have difficulty assessing what constitutes normal menstrual cycles or patterns of bleeding. By age 15 (years old), 98% of females will have had menarche. Although menstrual cycles vary considerably during the first few years after menarche, the majority of cycles in adolescents last 21 to 45 days with two to seven days of menstrual bleeding. By the third postmenarchal year, 95 percent of cycles fall into this range. The average adult menstrual cycle lasts 28 to 35 days with four (4) to six (6) days of menstrual bleeding.

Adolescents with regular menses have cyclic estrogen secretion that permits orderly growth and shedding of the endometrium (estrogen-withdrawal bleeding), even in the absence of ovulation.

In addition, the secretion of progesterone associated with the occasional ovulatory cycle in adolescents with regular menses helps to stabilize endometrial growth and permits more complete shedding.

Now let’s talk about Abnormal Uterine Bleeding. What is it and why does it happen?

A number of medical conditions can cause abnormal uterine bleeding, characterized by unpredictable timing and variable amount of flow. Although a long interval between cycles is common in adolescence due to anovulation, it is statistically uncommon for girls and adolescents to remain amenorrheic for more than 3 months (90 days).

Abnormal Uterine Bleeding (AUB) may be caused by ovulatory dysfunction and bleeding patterns can range from amenorrhea to irregular heavy menstrual bleeding.

The most common cause of AUB in adolescents during the initial one to two years of menstruation are anovulatory cycles (no ovulation), which are related to immaturity of the hypothalamic-pituitary-ovarian axis. 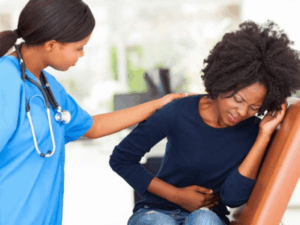 Other common causes of AUB in adolescents include:

More than one cause may contribute or exacerbate AUB in a given adolescent.

To chart your menses may be beneficial, especially if your menstrual history is too vague or considered to be inaccurate.